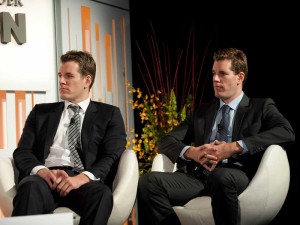 Bitcoin (BTC) is much more than its market price, recently commented Cameron Winklevoss, one of the co-founders of the Gemini exchange. He also added that comparing BTC to gold is just a temporary milestone.

Bitcoin is a “Source of Truth”

One of the Winklevoss twins called BTC “a source of truth“, with the rationale that the large-scale, open-source project was a unique tool for censorship-free transactions,.

Because Bitcoin is open source software, its possibilities are boundless. I often talk about gold as a target market cap, but that’s really just the beginning…it’s digital gold, source of truth, etc…

The $7.7 trillion valuation is used to present the case for higher BTC prices, in case BTC becomes an international store of value. Currently, gold is gaining favor with central banks, which are dedicating a larger share of their portfolios to the precious metal.

For now, BTC ownership is only favored by unofficial institutions. The Gemini exchange is one of the biggest BTC holders, along with other market operators. Vault storage of BTC is the norm, and custodial services are on offer. Recently, there has been growth of 1,000 BTC wallets, significant stores of wealth.

The interest in BTC and gold is on the rise as economic data start to point to a potential recession in the US and other leading economies.

Bitcoin still has the flaw of volatility, sometimes moving hundreds of dollars in a single day. Gold, on the other hand, is much less volatile, and its gain in 2019 is relatively tame compared to BTC growth. However, the leading cryptocurrency can also cause deeper losses depending on the moment it was purchased.

Gold also still need significant new inflows to keep up the pace, and has a limited upside. As for BTC, at current prices, a rally is still expected, along with a much higher valuation.

BTC corrected deeply on Wednesday, erasing hundreds of dollars within minutes in a flash crash. BTC traded at $7,769.90.

What do you think about the future of BTC and its multiple use cases? Share your thoughts in the comments section below!