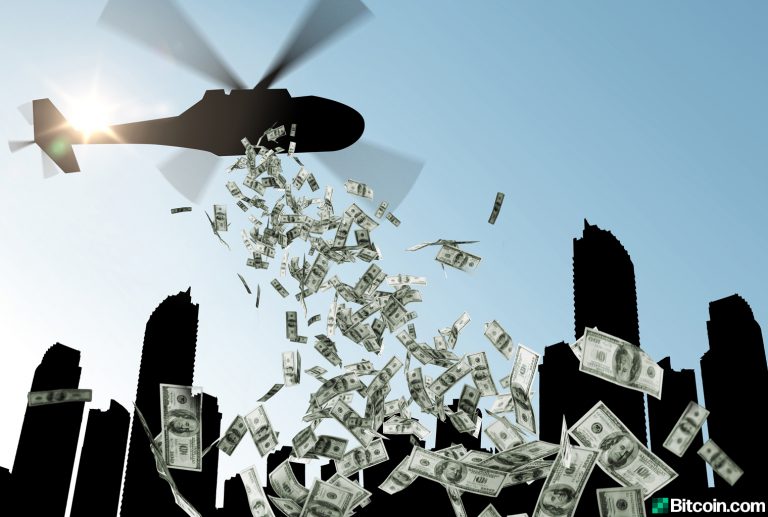 Central banks worldwide continue to inject more stimulus into the economy as they predict the onset of a new financial crisis. In the face of a sluggish economy, monetary easing, negative interest rates, and ‘normalizing’ the balance sheet is the name of the game these days. Now central banks are contemplating even more unconventional methods of monetary policy like helicopter money to save the economy.

Also Read: Money and Democracy: Why You Never Get to Vote on the Most Important Part of Society

The world’s reserve banks are attempting to guide the economy in hopes that they can steer clear of a financial meltdown. There’s been a domino effect of monetary easing where at least 19 central banks have slashed interest rates, participated in large-scale asset purchases, cut reserve requirement ratios, purchased debt securities, and pumped billions into specific markets. For instance, during the third week of September, in a two-day period, the U.S. Federal Reserve injected roughly $128 billion into markets through a repurchase agreement.

Helicopter money or direct financing is a form of monetary policy that starts when central banks transfer money directly to the private sector and even taxpayers. Essentially, the process can be a direct distribution of funds into the economy and some have called the idea a citizens’ dividend. Years ago helicopter money was considered a last resort type of scheme and was deemed worse than quantitative easing.

In 2016, the leading global bond investor PIMCO wrote that since the 18th century there were approximately 57 types of helicopter money situations implemented up until 2007 and “all had dire economic consequences.” A decade later, however, ideas like MMT, basic income, and helicopter money financing have been seen in a positive light by certain groups of individuals. MMT is a controversial, hybrid Keynesian concept that promotes the idea that government can print as much as it wants while also offering tax cuts or direct financing to special interest groups at the same time.

In June 2016, the Bank of Japan (BoJ) contemplated using helicopter money to stimulate the economy. According to reports at the time, the Japanese central bank considered dropping sub-$100 payments to low-income residents. A month later the BoJ decided not to use the helicopter money approach but did approve a $274 billion stimulus package instead. In 2016 Japan would have become the first modern economy to print money for direct distribution. “I think helicopter money remains off the table for now,” Mizuho Financial Group’s (MHFG) senior economist Colin Asher told the press at the time. Fast forward to today, and bankers and economists are starting to believe that ideas like helicopter money and MMT are innovative economic concepts.

Deutsche Bank’s recent report has argued for helicopter money and the financial institution says because the economy is so bleak, central banks are planning to “explore more unconventional policies.” Deutsche Bank thinks that traditional methods of monetary easing are not enough, and central banks will need more stimulus in their arsenal. The recent report emphasizes that central planners using direct distribution methods could spur more consumerism and spending. “[Helicopter money] could be highly effective if properly deployed,” Deutsche Bank pointed out.

The Fed: Current Easing Is “Organic” – Don’t Call It QE4

There are many signs showing that bankers and central planners are unnerved and panicking over the looming recession. However, the central banks themselves are to blame for the mess they have caused as there’s roughly $15 trillion in negative-yielding sovereign and corporate debt worldwide. The yield below zero percent interest has scared the daylights out of economists who believe negative yields never equate to strong monetary policy.

In September, the Federal Reserve started its easing program last minute when it cut rates for the first time in 10 years. Not all the Federal Reserve board members agreed with the easing policy, and the first quarter-point reduction was voted in by a 7-3 vote. Fed Chairman Jerome Powell explained that the voting committee’s dissent was healthy to the central bank’s planning process. After printing $128 billion, Powell asked the press not to call the process the fourth round of quantitative easing, or QE4. Unlike prior QE schemes, Powell said the current procedure is an “organic” approach.

Besides discussions about helicopter money, central banks like the Federal Reserve inject fiat into the system by purchasing Treasury securities from specific agents within a repo. The Federal Reserve Bank recently conducted a few spot repo operations, which provides smaller banks with the opportunity to trade Treasuries and other forms of securities for cash advances. The concept is just another form of the ‘trickle-down economics’ and proponents of the scheme believe the cash helps fund the repo dealers. The repo agents are then supposed to distribute the funds throughout certain sectors of the financial sector. During the start of Q4 2019, the New York-based Fed revealed an overnight repo operation where dealers introduced more than $63 billion in collateral. A liquidity crunch, slow economic growth, and inflation are the main reasons why the central bankers are scrambling to fix the problem they see growing into a financial crisis. Back in 2008, there were similar methods used during the onset of the economic meltdown where short-term yields were extremely volatile, and banks started participating in overnight repurchase programs. The Fed and many other banks have already started conducting overnight repurchase operations. Once again, central banks that think printing stimulus and bailouts are the only way to help the situation.

What do you think about the central banks’ extreme measures and ideas of using helicopter money to save the economy? Do you think cryptocurrency will help the situation? Let us know in the comments section below.

Did you know you can buy and sell BCH privately using our noncustodial, peer-to-peer Local Bitcoin Cash trading platform? The Local.Bitcoin.com marketplace has thousands of participants from all around the world trading BCH right now. And if you need a bitcoin wallet to securely store your coins, you can download one from us here.

TheBitcoinNews.com is here for you 24/7 to keep you informed on everything crypto. Like what we do? Tip us some BAT